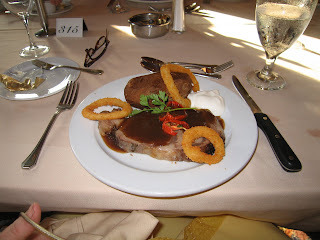 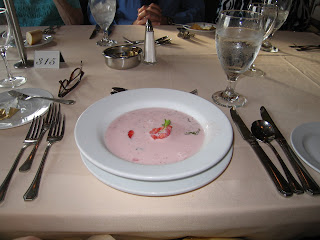 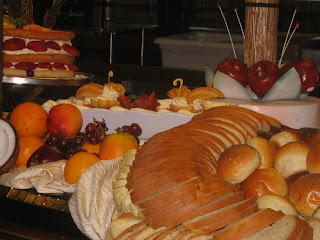 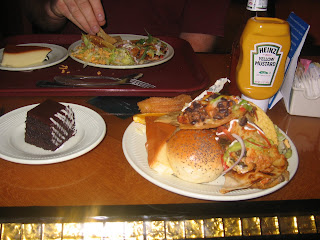 What do you do on a cruise? Eat, eat, and eat some more. My dad calls it the Thanksgiving Diet: you eat until you don't want to ever eat again. That diet doesn't work for me, apparently.

On the way home from the cruise at 10 am, what do I ask? "Should we stop at In'N'Out Burger to get some hamburgers?"

Everyone groaned and said NO WAY. The Thanksgiving Diet works better for them, or maybe I didn't eat enough on the cruise.
Posted by Jocelyn Chappell at 9:47 PM

Wow, what a feast! It looks amazing and I am hungry

Looks incredible. Brent you remind me of Richard asking about 6 o'clock on Thanksgiving day after a very big Thanksgiving dinner at 1, "What's for dinner?" (Granted that was a few years ago - some things you just don't forget.)
As for the In 'n Out hamburgers you would have had to wait an hour to get one. Maybe everyone would have been hungry by then. Janet, Mother and I stopped at an In 'n Out about 10:30 am after Mother picked us up at the airport last summer. We "had" to go shopping until they opened. It was a good thing we stopped then or we would have missed our In 'n Out Burger on that trip.

Brent was very conscientious about how much he was eating on the cruise and when he was satisfied, he was done! However, our waiter, in a good naturedly way, would give him a hard time if he didn't complete his meal or sometimes if he didn't order another dessert! By the end of the trip, Brent didn't really want to hear from the waiter that he should have cleaned his plate, so he swapped his half eatened dinner plate with his dad's empty plate. The waiter caught on and had a good laugh.

Must have been some food! Who can say no to In'N'Out?

As we were leaving Fado's where we had great Irish food with Andrea in Las Vegas, on our way to Utah and Idaho, we drove by an In 'n Out. I asked Brent if he wanted us to stop. He went along with the joke and said he was ready.

Just to be clear, my dinner at Fado's was delicious and I left stuffed. There wasn't even room for In 'n' Out.